Much More Than a Bowl of Noodles – Pho Vihn Long 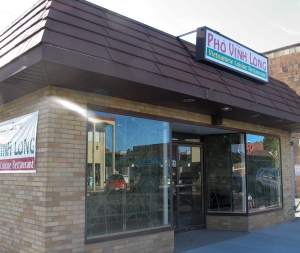 Picking up the final jar of sprinkles required for the edible craft project I would be making with Misty that evening gave me the perfect excuse to be on D Street at lunch time.  It didn’t even take much arm-twisting to get Ron to agree to try Pho Vihn Long.  Maybe he thought I would pick up the tab since it was my idea.

When you first enter the clean, small dining room, scents of spices and incense tease your nose, offereing hints of what’s to come.

END_OF_DOCUMENT_TOKEN_TO_BE_REPLACED

Named after a famous Vietnamese dish and a town in that country, the restaurant will seat about 30 diners and feature bamboo floors.

Pho (rhymes with “duh”) originated in Vietnam in the 1880’s and spread to southern and central Vietnam, gaining in popularity, during the 1950’s.  It is a rice noodle dish served in a flavorful broth which takes many hours to prepare.  Traditionally, the broth is made by simmering beef (and sometimes chicken) bones, oxtails, flank steak, charred onion, and spices.  Seasonings may include cinnamon, star anise, charred ginger, cloves, and black cardamom pods.  Thin slices of beef or chicken are added to the dish.  It usually arrives at your table with accompaniments including green onion, cilantro, Thai basil, lemon or lime wedges and bean sprouts.

Vietnam’s best known dish is meant to be enjoyed with both hands: chopsticks in one, grabbing the noodles, and soup spoon in the other to scoop up the broth.

Already wildly popular in major metropolitan areas of the United States, pho is sure to become a favorite among the foodies of Charleston.  Over 1000 Pho restaurants operate in this country, including national chains like Pho Hao.

For more information about pho and other Vietnamese foods, try visiting phofever.com or wikipedia.

Be sure to give Pho Vinh Long a try, we sure will!