Like James Cameron working for a decade on the movie Avatar, I have been working on my next signature post.  Remember the last one?

So, several months ago, you may have recalled seeing the attached video:

It wasn’t long that Fork You was approached to give it a review.  We, who am I kidding?  I gladly obliged and we were sent a couple gift cards.  All the while promising a review.  Over the past months the kind Wendy’s lady probably thought we just swiped her gift cards and sent them out as stocking stuffers for our kids.

That’s not true, our kids don’t deserve such a treat.

No we actually put them to use…I even mentioned trying to use the gift card at the Flatwoods Wendy’s in the infamous “you-must-support-a-West-Virginia-establishment-no-matter-how-crappy-they-are” post, aka: The Custard Stand review.

Well finally I tried it, and finally I’ve gotten around to finishing my post:

(please accept my apologies for my crappy iphone photos)

From the video we all know what was promised, a nice big sandwich with fresh applewood bacon.  To that end, I’ve heard about this thing called “Applewood” in ads from various other establishments.  So I asked myself what kind of cuisine credibility could I offer Fork You if I – a person who, when he sees bacon, must eat it and eat it all – did not even know what was meant by “Applewood”?   So I began some research:

wiki – nothing.
the baconbaconbacon blog – too much work to see if I can find any info there.
Finally I stumbled here and realize it’s simply a term for smoking using apple wood.  Supposedly it produces a lighter and sweeter smoke than hickory.

But that’s what I found out, I’m sure someone will pipe in about cruelity of smoking beef in that it simply takes more dignity away from an already butchered animal.   Oh well…. that’s life on the food chain.

So I order my burger at the Kawawha City Wendy’s.  I get the single, you can also get a double and a calorie busting triple.  I ordered mine as pictured.  Normally I wouldn’t get cheese but I wanted the whole experience of this creation. 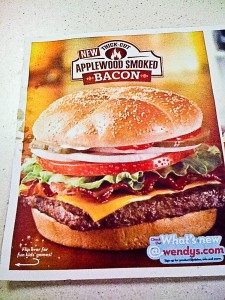 Now that’s the picture from my the placemat at my table.  Remember I said as pictured.

I know you’re waiting for it: 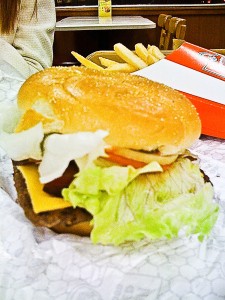 My first reaction after the unveiling was – HOLY SMOKE… I see tomato.  I see Onion,  I see lettuce,  I see bacon, I see cheese.

I have to give Wendy’s an A- or B+ on this.  I think this is an honest effort.  The bun is different than a normal bun, you can tell that also.

But let’s look a little closer as I may be duped in some manner: 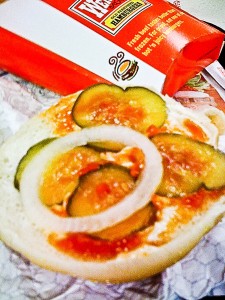 FOUR PICKLES!!!!!  A RING OF ONION!!!!  all of this is miraculously fused to the top portion of my bun.  Ketchup…. looking good. 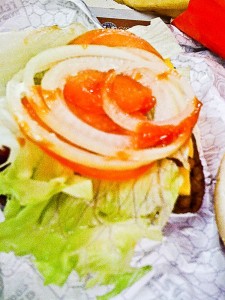 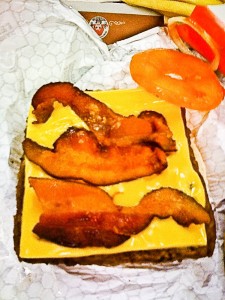 Three pieces of bacon – ok it’s probably actually three half pieces of or three thirds.  But it’s still three noticeable pieces of bacon on my burger.  Cheese covering the patty?  Makes me wonder… When Wendy’s decided to go with a square pattty did they base the shape and size on the standard American cheese slice?

Side note:  Does anyone know why Wendy’s has a square patty?  Well according to one of those useless trivia books I have beside the Fork You Mansion’s throne, it has to do with the fact a square patty will be bigger than a circular patty with the same volume of meat.  A simple experiment can show you this:  Draw a square with 4″ sides.  Now in the center draw a circle with a 4″ Diameter (that would be a 2″ radius btw).  What happens?  the circle fits inside the square.  So Wendy’s approach offers illusion that you’re getting more meat because their patty is bigger than their bun.

Ok, back to the task at hand:

So how was the burger?  Well it was good.  Much like any other burger I’ve ever gotten from Wendy’s.     The bacon was more noticable than I had anticipated.  That I did like.  However, other than the stronger bacon presence, the burger was much like this review – something that happens with a lot of movie sequels – all fluff and not much substance.

It’s a burger.  A better than average fast food burger?  Yes.   Yet I still came away feeling slightly less satisfied for the cost.  Like my previous burger review, it seems it has the same issue in that for a couple dollars more I could purchase a burger and fries at a more upscale place and feel much more satisfied.

That’s really my only gripe…. I think it’s a pretty good burger just a little costly.  This burger alone used the majority of our $5.00 gift card.  It exceeds that for the combo meal.   In my twisted world – I should be able to walk out the door for $5 with this burger, fries and drink.

Just to let you know, I have used the other gift card on another Bacon Deluxe and it was very similiar in size and ingredients.   So kudos for that. 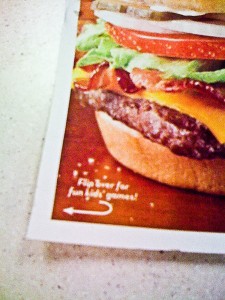 It’s hard to read but it says “Flip over for fun kids’ games!” 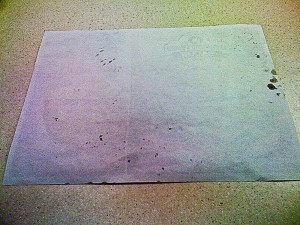 Nothing – guess the kids have to create their own fun games.

It’s this kind of attention to detail that I feel is displayed on the burger as well.

The burger needs something to make me crave it.   I don’t know what, but something.  Other than that it’s still a pretty good fast food burger if you’re into that sort of stuff and you should check it out.  Then comment in our forum.

Here’s a few other reviews of the Wendy’s Bacon Deluxe to check out: