After getting a daily dose of art history at the Louvre we decided it be best if we tried to find our hotel before it got too late. Easier said than done, because the Louvre is hard to escape. You keep noticing things you didn’t know where there in top of it being a big maze. We wanted to see the Rubens in the second floor, because like Sir Mix Alot “I like em big and juicy”, but that section was closed.

We started our trek along the Seine passed the Musée d’Orsay, the national assembly and the Hôtel National des Invalides towards the Eifel Tower. Our hotel was off of Rue Cler, which is a pedestrian street full of market stalls. It was full of activity as we passed through and I wanted so bad just to take it all in, but we were wet, cold and needed to find the hotel.  We found Hôtel du Champ de Mars not a minute too soon.

We got our room key and collapsed on to the beds. We let our feet dry as we watched a combination of French, German and American TV.  We ended up watching live coverage of Germany competing against other European teams in the biathlon of all things.  After about an hour of channel surfing and napping.  I announced that a little rain was not going to keep me from the Eifel tower. I would not forgive myself if I missed this opportunity.  We wondered over a few blocks just in time to catch the nightly light show.  We watched the show for a few minutes and head for the north pier for tickets.  Bad weather worked in my favor on this one.  I did not have to wait to purchase my 8 euro ticket to the 2nd level and I got on the first elevator available.  During the summer I suspect the wait to be insane.  No fast passes on this one. After about twenty minutes of photos I had my fill.  It is a little scary up there when it is wet and windy.

We made our way back to Rue Cler bypassing the dozen souvenir hawkers.  The discounts got bigger to more you said no.  On our way back we walked down a street and saw a couple talking about where to eat dinner.  The man’s voice was very familiar.  It was the Food Network’s Tyler Florence!  I tapped him on the arm and said “I know you” and kept walking.  He said hi, too.  I later sent him an @tylerflorence reply on twitter and he was nice enough to respond.

We found a nice warm table on the patio of Cafe Central to finally rest.  My sister tucked into a bier and a warm bowl of french onion soup.  I order a glass of Bordeaux and one of the specials.  The special was described as a salmon crumble with leeks in a cream sauce.  It was served with a small portion of mixed greens.  This crumble was a perfect dish for this cold night.  It was a rustic homestyle dish that reminded me of my mom’s peppery tuna noodle casserole without the noodles. 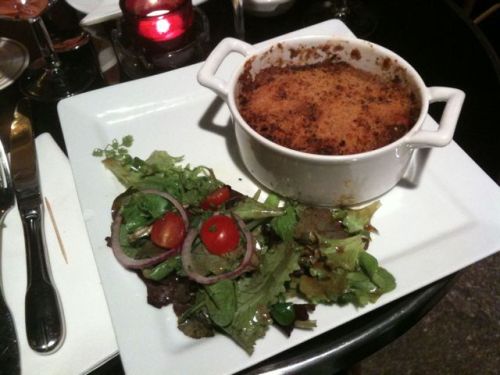 I ended the meal with a cheese course, but since I don’t speak French I can only tell you we had a goat’s milk cheese, a cow’s milk cheese and the famous Camembert. I wish I could do better.  All I know is that I’m on a serious ice cream drought.  I hope to have some soon.

The next morning we planned to get up at 7:00am and I was up but my sister didn’t move a muscle to the alarm. So I sat there and finished the prior post and then got cleaned up.  The shower woke my sister.  I left to go explore while she got ready.  I walked up and down Rue Cler snapping shots of market stalls of bread, produce and meats.  Parents walked there kids to school as the day’s catch was iced.  I picked up a few pastries to fuel our walk to the  Arc de Triomphe.  We bagged that site and made our way down Avenue des Champs-Élysées to the Obelisk of Luxor.  All the great retailers are represented but I enjoyed the European Christmas market at the end.  Little white shacks line the street with vendors selling gift items, festival food and warm Glühwein. 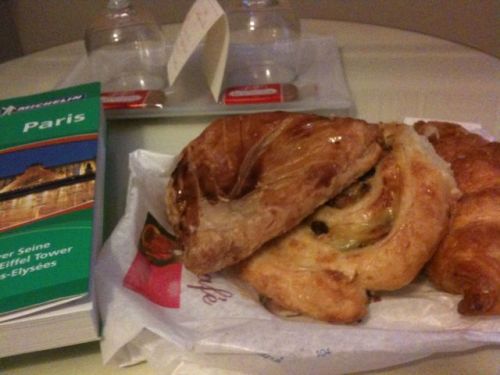 We crossed the Seine and approached the Orsay to fine the we would not be seeing any Monets today.  The finicky French had decided to strike over night.  So we did the next best thing and sat in a cafe to eat lunch.  I could get use to this. We stopped in Le Deux Musees located right behind the Orsay.  We took a seat inside away from the rain.  I scanned the menu and found lamb chops, medium rare with green beans.  They were lovely with my Record Beir. I had to have a Napoleon and a cappuccino to wrap thing up. 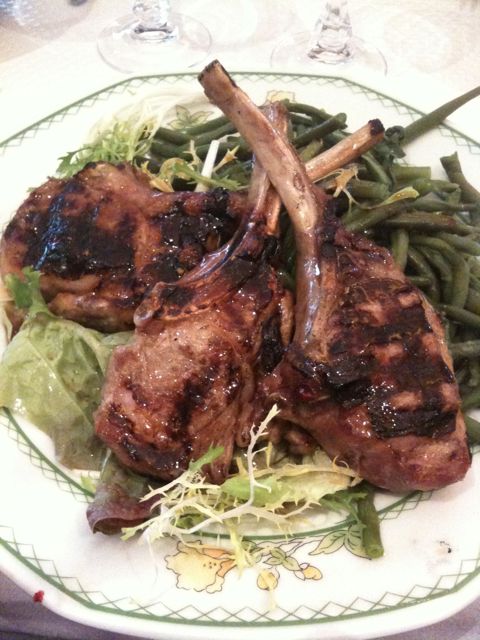 We decided to take a bus tour since the museum was a bust.  We road two different loops. One of central Paris and one of Montmartre.  When didn’t get a chance to check out the racy seen near the Moulin Rouge.  We got off at the opera house and caught a crowded metro train back to Gare de l’Est.

This entry was posted in Dinner and tagged Food, France, paris, travel. Bookmark the permalink.