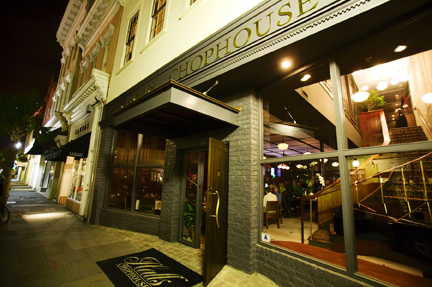 Believe it or not, I have a tendency to railroad my family into eating at the restaurants I choose.  I do try to be a little more thoughtful on vacation, though, and let Ron pick one place.  Sort of.  I pick one place that I think Ron will really enjoy.  This year, on this trip, that one restaurant is Halls Chophouse.

You see, Ron is a meat and potatoes kind of guy.  He loves a good steak and mashed potatoes can be a religious experience for him.  Hall’s is a quintessential steak house.  They offer dry-aged beef, iceberg wedge salad, creamed spinach, onion rings…all the dishes you’d expect at a steakhouse.  After forcing him to endure J Paul’z, the gelato place, and a double helping of Taco Boy, I felt I owed it to him to take him out for a man’s man sort of meal.

Located in the prime shopping area of the peninsula, Halls sits proudly on King Street.  It was an easy walk from nearby parking at the Visitor’s Center.

The place was bustling with activity.  There must have been a group of people meeting here (I saw some nametags) in the first level around the bar.  We were seated nearby.  I didn’t have to worry about the kids being too loud for the other patrons, no one could have heard them over the crowd enjoying cocktails and conversation all around us.  I am sure the upper level was more intimate, but I didn’t really mind.  It was a happy, lively, casual atmosphere.

Our comfortable table had two chairs on one side and a super comfy leather bench on the other.  Hope and I snagged the bench.  The interior of the restaurant has an old-world feel with exposed brick and a dark wood bar.  The low-lighting, while kind to faces, is brutal to bloggers wanting to take photos.  So you’ll have to use your imagination.  (There is a photo gallery on the Halls website.)

At Halls, the side dishes are served family-style and the salads are large enough to share.  Hannah and I split a Caesar salad while Ron munched on the complimentary bread.  The girls each ordered a Coke, served from old-fashioned glass bottles, and I ordered a glass of Macmurray Pinot Noir.

Split on two separate dinner plates, the salad was still a generous portion for each of us.  The freshly made tangy dressing lightly coated the crisp romaine lettuce leaves which were showered with grated parmesan.  We both loved the salad.

I chose the 12 ounce filet mignon, planning to share it with Hannah. Taking one for the team, I ordered the filet medium well, knowing that Hannah would turn her nose up at a medium doneness.  (Hope had already informed me that she would not be eating anything and reiterated her point by consuming a bowl of cereal at the condo before we headed downtown.  She made good on her promise.)  As our side dish, Hannah selected the macaroni and cheese.  What a shocker.

The steak was large and perfectly cooked to my specifications.  The plate was garnished with a broiled tomato half and a smear of unidentified, tasty green sauce.  I am going to guess it was akin to a chimichurri.   The melt-in-your-mouth, Capital T Tender filet mignon was an easy sell to Hannah.  She ate about a third of the serving.  She said it was the best steak she had ever tried.   If I hadn’t planned to share with her, I would have ordered the scallops with vegetable risotto.  I am not a huge fan of steak, even steak this good.  But I can appreciate the quality.

The small cast-iron skillet of macaroni and cheese was topped with crispy golden bread crumbs.  Again, making Hannah a very happy camper.  It was good, but the pasta was a little overcooked for me.  I prefer my pasta just shy of al dente, but I am probably in the minority on that one.  On occasion, Ron insists the pasta I cook at home is not done at all.  I tell him to microwave his serving.

I must brag a little on Hannah.  As a sixth grader, she is caught between child and young adult.  Sometimes that is confusing and makes social situations difficult.  She. Was. Golden.  Both my girls having placed the napkins gently in their laps, reminded Ron to do the same.   I was so proud of Hannah.  Not only was she polite and lady-like, it seemed that she truly appreciated the quality of the meal.

One of the coolest parts of eating at Halls was the service.  Not only was our server, Emilee, polite and friendly, but she was a wealth of knowledge, patiently answering all our questions about the dishes and providing recommendations.  She made me feel perfectly comfortable about bringing my children, too.

When the food arrived, we were “swarmed” as Ron described it.  Meaning that three individuals plus our server delivered the entrees and served spoonfuls of each of the side dishes to us.  When the plates were cleared, the same process was used.  One second they were on the table, the next second all dirty dishes had disappeared and Emilee was scraping the crumbs off the white linen cloth.  The leftover mac & cheese was packaged for us in the kitchen and brought back to our table in a neat brown box with a seal.

A well-dressed, friendly man greeted everyone when they came in.   After reading some of the testimonials on their website, I am certain he was one of the Hall sons.  He worked the room, chatting with customers and asking about their food. He spoke to us when we were first seated.  Then we ran into him when I walked Hope to the restroom and he commented about our red hair, which matched his own.  Then when we left, he missed our departure, but walked outside onto the sidewalk to shake our hands and tell us they appreciated our business and hoped we had a wonderful experience.  We assured him we did.

Not only does Halls Chophouse serve high quality food and prime dry-aged steaks, the service they provide sets them apart from the majority of restaurants.  I recommend Halls without hesitation – FIVE FORKS.

I remember once that Ted Nugent had a brand of beef jerky out with the advertising slogan of … “You can’t beat my meat!”

Well Halls could say the same I think.  This is the second steakhouse I’ve eaten at in Charleston, the other being Oak, and I have to say that I’m going to give the edge to Halls.  Both however being the same Fork.

First let me say, I have no pictures, as it was dark in the place and the photos we did take just turned out crappy.  If Susan chooses to post some, well I’m sure they do not do Halls the justice it deserves.

So we arrive one evening, I think our reservation was for 8 or 8:30….. yes fancy, reservation… and you know it’s a warranted reservation.

Well… the place is packed.. we are promptly seated.. and promptly waited on.

As Susan said, Emilee our server was very helpful in describing the cuts, the differences in 45-day aged and their normal fair, and the typical descriptions of the taste between each.

She gives us a while to look over the menu… I order beers which also were promptly brought back out, and when emptied I was promptly asked if I wanted another… wash, rinse, repeat.

Now, as a side note, have you ever heard stories about a patron spilling wine on his/her white shirt, and one of the waitstaff letting whomever borrow theirs?  Well I have, and if it was an urban legend before, well it is no longer.  When I went to the clean and well maintained bathroom, a guy was in there changing his shirt, and exclaims to me “You’re not going to believe this…. I spilt wine on my shirt and the waiter said I could have his”.  Scouts Honor.

Back to the food, not long after I return our food comes out.  If I recall correctly I asked Emilee if the 14oz was pre or post weight and she said post.   Not having a scale but looking at the size of this beast, I would believe it.  (I’m guessing it’s a 16oz cut precooked and they average 2oz of moisture cooking off maybe?  Is this a good rule of thumb? as I would find it difficult to determine this postcooked weight)   Anyhow, the slab of geritol aged beef was huge.

(btw, I think Emilee said the beef was free range – not sure, actually probably not “free range” but maybe just “grass fed”  I’m sure if that’s the case it would be mentioned on their website- nevertheless it wouldn’t have been an issue for me either way and that includes hormone injected grain fed)

So my 45 day aged beef, priced at $49, was accompanied by a family portion of Yukon Mashed Potatoes for $8….

I didn’t eat no stinking salad.

My steak was “heavenly” the best steak I’ve had.  It makes the Chop House in Charleston West Virginia steak’s look like country fried steak for what I would say is a competitive price.

The mashed potatoes, also heavenly.  I would still be eating them if I hadn’t ran out.

The service was great…

Was it expensive… yes…. Oh Yes it was.. but was it worth it?