After putting up with Susan and her twenty year High School Reunion- serious folks, that’s a whole ‘nother post in and of itself – we had to venture back to Buckville to grab the kids.

Hanging out at Stonewall listening to far too many stories of yesteryear wondering why I’m here and for how long, we stayed far too long.  Thus by the time we arrived to get the kids it was close to lunch and because we had two hours back to the Fork You Mansion, well let’s feed the beast now and be done with it.

Stopping to fill up with overpriced petrol at Sheetz, I figure what better place to kill two birds with one stone.  Grub and Gas and Go.

That’s right, we could fill up, grab some M.T.O ~ that’s made to order ~  and get back on the road.  Plus I’ve blown my diet all weekend consuming far too many beers (ok that’s on my version of my diet) and other non healthy chips, dips, and otherwise junkfood, I figure what the hell, what’s one more day….

So Susan and the oldest daughter venture in to decide what they want, I’ve already decided pretty much what I’m getting, and this is where I’ve made my mistake.

You see, I was turned on to Sheetz about seven or eight years ago, when my Mountaineer Ticket Broker and Wing Meister stopped at the Exit 99 Sheetz during an early morning commute to get some – as he called it – MTO…

Early morning is probably about 7Am or so as we had to be at The Friends Motel in Morgantown by 9Am for the 3:30PM kick off.

Once again I digress.

We ordered Sub Sandwiches if my memory serves me correctly… I was introduced to the touch screen wonders of Sheetz… yes I want cheese, oh what the hell… double the meat, yes!  pickles, peppers, Jalapenos??? hell yes..  mayonnaise?  Punch that too, what the hell.. Six or twelve inch ~ Bigger is better! I want twelve… punch punch punch

Not realizing what I had ordered I recieved these two gerthy wrapped up six inch subs….

Ever since that day, Sheetz has almost always been a ritual..  If it’s getting food, gas or beer, we always seem to stop at that particular location during football season.

The subs would last all day, and were delicious.

WELLLLL, today I wasn’t getting a sub and this wasn’t the Exit 99 Sheetz.

I was getting a burger.  You see, Sheetz has been selling burgers for a few years now.  I tried a burger one time and it wasn’t half bad.  Pretty darn good if you ask me.  So that’s what I’m having again.

Paying for gas I head on in… and begin punching buttons.

I choose the Southwest Burger, I add hot pepper jack cheese, it already comes with lettuce, tomatoes, jalapenos and onions (basically I think this is supposed to be a salsa).  No I don’t want to double the meat, and I’m going to stick with the default sauce.

Fries, oh what the hell, give me the Supersize Big Gulp Cup full…. I’ll split with Susan.   To finish this off ….. I got a Diet Dr. Pepper.

We can’t get too crazy now.

But I didn’t.  I didn’t even complain, I just smiled and said “Thank You Sir, May I have another”

Really what a stinking rip off.

Ok, so I go pay, Susan was also working the Sheetz Machine ordering some type of sandwich.  She has not mastered the ordering of Truck Stop Cuisine, because I realize she’s ordering some toasted flat grecian bread with flacca this or ruballa that….  What the heck.. first you don’t order that stuff at gas stations and truck stops, and you sure as hell do not order it in Buckhannon, West Virginia….   You need to order Coal Miner Cuisine, and that is food that fills people up and tastes good and is not too expensive.

But she’s on her own, she’s a big girl and can take care of herself…

So I pay for everyone’s food, and wait.

checking out the newspapers….

My order is served up.

How did it taste?  well my burger was luke warm.  I realize this is not one of Sagcious Hillbilly’s wild and free cattle, but is in fact a frozen patty that has probably been assembled from the scrap heaps of the slaughter house and packaged up for places just like Sheetz to sell to people just like me.

The patty is huge- about 3/4″ thick and fills up the bun. Now my lettuce and all didn’t quite look like the picture but, well, do they ever?

I bite in and it’s just luke warm.  Probably could have stayed on the griddle a few more minutes or it was already taken off, and packaged, and was sitting there while I read the newspapers.

The Fries – the fries were fresh out of the vat of fat that we call grease.  Very good…

I’ll take hell for this because I waited a long time, my burger was cold, etc. but I’m giving Sheetz Three Forks.

Yes, line up outside with your pitch forks and tomatoes. I know: how could I?

It’s simple.. I like this type of food.  I’ve had two burgers from different Sheetz locations and they were both very hot and very tasty, similiar to Hardees in style.  Taking the temperature issue away, well, the flavor was really good.  The fries were really hot also.

But I will come back to Sheetz, even if I was raped by the owner… I just like it… (not being raped, but going to Sheetz).  Plus it’s a convenience store, serving up hot food is probably not their specialty (although their new ad campaigns are pushing that).

This experience was probably Two Forks, but because of the Fork You reviewing methods, I’m going with Three because generally I have a good experience, the food is usually good, and so is the service.

A Sheetz is currently under construction at the Hurricane exit.  Ron is beyond excited about it.  He wears me out wanting to stop at any Sheetz we pass on the highway to get an MTO.  If he’s not hungry at the moment he’ll say he can “save it for later.”  I contend he just likes to push the buttons.  After reading his review, I think my theory has been proven factual.

Truthfully, it is a great place to stop on the road.  They have a large variety of snacks – and not just junk food.  At this particular location I noted fresh fruit, low-fat yogurts, several different salads and some snack packs that included items like pita, hummus and fruit slices. My favorite thing about Sheetz is the NO FEE ATM.  That makes it a great place to stop on the way to WVU games: Ron pushes the buttons on the MTO screen and I get our parking money fee-free.

A man, or someone who knows men very well, invented the MTO.  Ron thinks all restaurants ought to have touch screens.  The process doesn’t have the same effect on me.

It does disturb me somewhat to order food at the same location where I fill my car up with gas.  I avoided for years any Arby’s, T-Bell or DQ located inside a gas station.  That just doesn’t seem right to me.  Eventually, I tried one such place and, after realizing that my food did not smell of gasoline or taste of windshield cleaner, my fears subsided.

The hot dogs looked pretty good behind the plexiglass, spinning on the stainless steel spinny grill thingy.  But so unhealthly.  And I am really trying to stick with the diet plan until we hit the beach in a couple weeks.  My older daughter and I check out the touch screen.

There were both hot and cold sandwiches available.  Now don’t let that fool you like it did me.  I thought that I needed to select “hot sandwiches” because I wanted mine toasted.  Not so.  You will come to a button to indicate your desire for crispy bread and melty cheese as you proceed through the “cold sandwiches” menu.   See their entire MTO menu by clicking here.

All the usual suspects are here: ham, turkey, roast beef, different cheeses, condiments and veggies.  Some of these buttons involve an additional charge, so be careful, or your $1.99 bargain could end up costing $4+!  I touched only add-ons which were free, when I could push the button before my daughter did.  She thought it was great fun.  (Maybe it is aimed toward men and kids?  Both demographics are a lot alike…)

My 6” wheat sub bun was filled with turkey, lettuce, tomatoes, green peppers, and banana peppers and then subsequently toasted and tightly wrapped up like a big paper eggroll.  Price: $1.99.  The Subway-esque result was satisfying.  I received plenty of crisp lettuce and I had tomato in every bite, but the other components were a bit skimpy.

Ron’s huge vat of fries, for $2.99, was a good deal, too.  I did taste a few of them, but came nowhere close to “splitting” them with him as he allegedly intended.  Bathing suit, don’t forget.  The fries were indeed hot and salty.  I think they have a light batter to increase crispness, like Burger King fries do, just less of it.

But is there really any such thing as bad french fries?  Sure, some are better than others, but it’s hard for me to turn down any french fry.  Even the ones that are slightly undercooked or the ones with a little brown spot in the McD’s container.  I eat ‘em all.

Here’s a super cool thing:  On the Sheetz website, you can “pretend” order your food to determine the nutritional value of it!  This is super cool for two reasons:  1) you get to click on all the buttons just like you were at a terminal in the Sheetz itself (Ok, you click instead of touch the screen, but it’s a good simulation.  Might satisfy Ron’s craving to push the buttons.) and 2) you get the cold, hard truth about what you are eating.

This is the nutritional value of my turkey sub just as I ordered it: 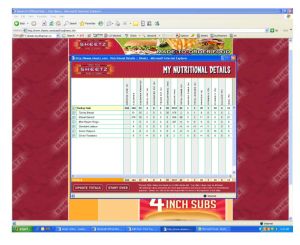 Just for fun, and ’cause I can, let’s take a look at what Ron ordered: 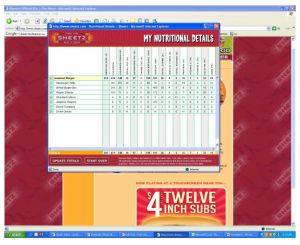 (When I get done writing this post, I am going to check out all the other buttons to get the nutritional value of their other items.  What fun!)

I washed all this food down with a fountain Diet Coke.  They had every kind of soda to choose from.  None of this monopoly bull crap where the establishment ONLY serves Pepsi or ONLY serves Coca Cola.  Plus they have flavor shots you can add.  Hannah added vanilla to her Diet Coke.

If you are on the road and need to get gasoline, cash and you have a rumbly in your tumbly, you can satisfy all three needs at Sheetz .  I can’t say that I will be eating at the Hurricane location, though.  Sheetz is there for dining necessity, not a dining destination of its own.  For that reason I award Sheetz TWO FORKS.