Scratch Your Itch for Asian – Ichiban 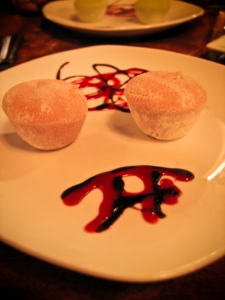 We chose Ichiban as the spot for a nice double date with our friends, Monica and Sterling (Monica posts a guest review below).  Located on Capitol Street adjacent to Bar 101, the restaurant has ornate, high ceilings and a beautiful bar.  The furnishings are nice but the tables are crowded very close to each other.  I felt like I was dining with ten people instead of the three I intended to eat with.  Even so, we didn’t have a problem hearing the conversation among us…maybe we are simply loud and we were infringing upon others’ dialogue.  Oh well, worked for us.

An extensive list of a la carte, maki and sushi dinners were available from the two sushi chefs working behind the bar on the upper level.  From that listing, I ordered the Jayden Maki – rolled sushi of tuna, cilantro, cucumber, spicy oil, smelt roe and chili pepper – 6 pieces for $10.50.

The sushi tasted good, however I did not get “spicy” from it.  Either they forgot to include the spicy oil I was promised or their definition of spicy is a whole lot different from mine.

I would have liked more spice, but I also would have liked a smaller price tag.  I get 6 pieces of spicy tuna roll at Taste of Asia for less than $7.  Another disappointment was that my new favorite sushi – the spicy scallop roll – is not available at Ichiban.

Ron rubs some wasabi on top of his sushi piece, places a slice of pickled ginger on top of that (which Monica and I tell him is not meant to be eaten with the sushi, rather as a palate cleanser between types of sushi) and picks his creation up with his fingers.  I refer to this as “hilljacking of the sushi”.  Sterling told Ron to never mind the women’s critiquing of his style…because Sterling “thinks it’s pretty”.  Quote of the evening!

I was invited to taste the sushi Monica & Sterling chose for their meal.  It didn’t knock my socks off, but it tasted good and I enjoyed being able to try a few different things – like a mini sushi buffet!

The vegetable spring rolls were nicely crisped, however you only got 2 rolls cut in half for around $8.

In honor of the soon-to-open Vietnamese restaurant, Pho Vinh Long, in South Charleston, I opted for a Vietnamese appetizer: spring rolls. This choice threw Ron for a loop.  He wasn’t expecting the cold wrapper, but that’s how they’re supposed to be.  I received two spring rolls, cut diagonally in half, for $8.  Hmmm…..$4 per spring roll.  At least they were filled to maximum density with shrimp, right?  Wrong.  There were maybe two small shrimp cut into pieces per roll.  Accompanying the shrimp to form the roll was lettuce, fine rice noodles, crushed peanuts and mint served with a spicy oyster sauce.  The sauce was indeed spicy and it really added to the rolls.  I am glad I tried them, but probably wouldn’t order the cold-style rolls in the future.  I guess I prefer the deep-fried Chinese version.

Ron chose our entrée of Asian Bourbon Pork for $22.  I tasted one bite of the thick pork chop, half an asparagus spear, and one “Asian” potato, which truly was just roasted potatoes with rosemary (I didn’t taste anything Asian about them) because I was too full from tasting Monica’s sushi.

I washed all this down with a tall Sapporo, priced at $6.

Continuing my reputation for trying everyone else’s food, I sampled the ice cream balls our friends ordered for dessert.  The presentation was very pretty and whatever sauce they used to write the character on the plate was yummy.  The ice cream balls tasted good, even though the names wouldn’t be something you would naturally associate with a dessert course in American culture.  The dough, though, was odd.  It was gummy-feeling and I had wished it wasn’t covering the tasty ice cream – I would have enjoyed them more without the dough but that is traditional to the dish.

My overall impression of Ichiban is a nice atmosphere with average-tasting food at an above-average price.  I greatly prefer Taste of Asia, however, downtowners would have to drive to at least South Charleston to enjoy it.  My review (and my very frequent meals) are partaken at the Teays Valley location.

I’m scratching Ichiban right off my list of things to do and not worry about doing them again.   This is the second time I’ve come here, once for some Sushi and drinks, and now this time, for “the works” {sushi, drinks, and dinner}

I can’t say I wouldn’t eat here again, because the sushi is good ~ albeit I can’t taste the difference between this sushi and the Taste Of Asia or Kroger’s.  That’s probably because I soak it in teryaki and paste it with Wasabi, then wash it down with a beer and ginger.   But my Sushi rating credibility is limited to the “lick it, slam it, suck it” variety of drinking Tequila.  I keep it simple as that’s the way I like it.

I had the pork chop, asian potatoes, and asparagus.  While waiting we tried a variety of appetizers inlcuding several differnet kinds of sushi, my least favorite was the spring roll… this uncooked egg roll material that reminded me of a skin graph gone bad.  It just wasn’t my bag, so don’t shoot the messenger.  However it was presented well, and because I have never tasted another spring roll like it to compare it to, I’ll give the chefs the benefit of the doubt and not say that it sucked.  It just sucked for me.  Someone else may think it’s the best thing in the world… and it very well may be.  Just not for me.

The sushi was more my speed… and yes it was good, but I can’t tell you what separates this from the cheaper versions I get at Kroger’s or your run of the mill chinese buffet.   Some may say they use better ingredients… well that may very well be true, but for me it didn’t transfer into any appreciable benefit to my all important taste buds.. Therefore I would advise that if you can get by with something cheaper then do it.   But I’m no sushi chef, so what do I know.   It tasted good, but I still couldn’t pick it out of a line up with other less expensive varieties.

Now what I did like about all the Sushi was the way you order it.  YES it’s like playing KENO.  You have these little slips of paper and tiny pencils… and you order it by checking off little blocks.  The only thing missing is four or five TV screens announcing when your roll is up.

Now the all important drinks… This bar has always had good beers, either stocked, or on tap, and tonight was no different.  Unfortunately they price theirs a little higher than I feel is necessary.  But you can get good beers on tap.

Now to be complete, our dining mates for the evening ordered some Ice Cream Balls…. I don’t know what to think of these things… The Green Tea was terrible.  The other we got wasn’t too bad… but… it just wasn’t natural.  The skin on the outside made for plenty of comedic banter, and.. well let’s just say this dessert item left a lot to be desired.  (maybe this was the only asian inspired thing)

Overall I think my meal was good, and if this was The Cracker Barrel I’d probabaly give it three forks.  However this was served to me under the guise of Asian food, so I can’t quite give it that.   Plus it was expensive for home cooking (which for all practical purposes is what it was).  So again, I can only give it Two Forks.  Like Susan.

My recommendation is just go to Bar 101 after work, order some Sushi, and sip some cold beers and watch Sportscenter, or talk to Mr. Kent Carper, as he frequents this place a lot.  (least he’s been there a few times that I’ve been there) give him a piece of your mind.  But overall, I think you can probably find a better place to spend your money.

As a return visitor to Ichiban’s, I knew what to expect from my favorite sushi place.  After all, the name Ichiban means “the best” in Japanese.  I have been known to wait outside on the street for the doors to open promptly at 5 o’clock.  This time, I was meeting friends, so my husband and I arrived to a table already prepared for us.  I was a bit disappointed by the unusually dry personality of our waitress.  However, I knew the food would not disappoint me, so I ignored her nonchalant attitutde.  Instead, I completed my sushi bar order and requested my “usual” appetizer (seared Ahi tuna).  The waitress seemed annoyed at the length of time my friends were taking to decide what to order…so we continued with our recommendations of “everything is good here” which did not really help them make their decision.

The food came…and it was delicious!  The sushi was phenomenal and the wine was as dry as the personality of our server.  Since we were conducting a “review” we stepped outside of our traditional order and decided to sample dessert…that was a mistake!  I decided to try the highly recommended green tea flavored ice cream balls.  After some much needed humor (“balls” is such a funny word to adult men), our dining experience was concluded.

The atmosphere was fun, eclectic and intimate, which is why Sterling and I are drawn to the place for an evening unwinder before our commute out of the city.

I give it FOUR FORKS.

19 responses to “Scratch Your Itch for Asian – Ichiban”